This week on Marvel’s Agents of S.H.I.E.L.D … Melinda May gets back into the field. Phil Coulson confronts the consequences of a past error. And Grant Ward is required to go above and beyond the call of duty.

The team pursue Akela Amador (Pascale Armand), one of Coulson‘s former protégées, who was thought to have been killed in a mission seven years ago but has now apparently gone rogue and developed psychic abilities which enable her to pull off seemingly impossible heists. 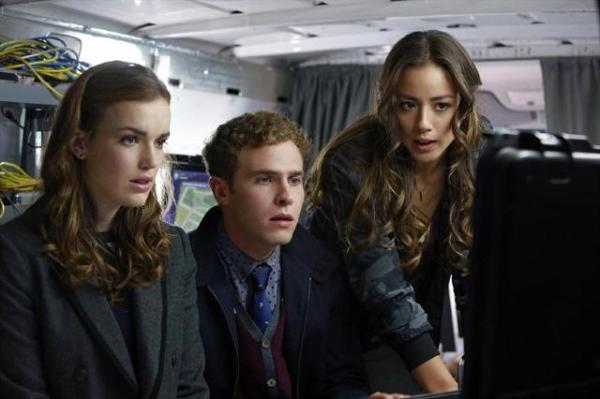 Simmons, Fitz and Skye are about to get a nasty surprise (Image: Marvel Movies Wikia)

This was not only the darkest episode so far but also the best balanced in terms of finding the right blend of action, plot, character and humour. If last week’s episode was an Avengers-lite departure into supervillain territory with a revised origin story for Graviton, this week felt more like the series’ bread and butter: a high-octane spy-fi romp in the mould of Alias or Mission Impossible, with apparent superpowers being merely the product of highly advanced technology.

That should perhaps be no surprise, as Eye-Spy‘s writer, Jeffrey Bell, cut his teeth on The X-Files, Angel and Alias. This story is much stronger than his previous effort, the similarly themed 0-8-4, with the action sequences less perfunctory and interwoven into a plot which twists pleasingly to keep viewers guessing.

Our expectations are subverted up front with the mass of identically suited and masked couriers – a sinister visual that could have been lifted straight out of a comic book – being the victims of a brutal attack. It then appears that the team is dealing with an X Men-like psychic mutant, only for the real source of Akela’s ‘powers’ to be more straightforwardly technology-based – more X-rays than X-Men – albeit ten years ahead of anything S.H.I.E.L.D. currently has.

The dark theme continues with the twin concepts of Akela being effectively under 24-hour surveillance and forced to commit crimes because of the kill-switch in her eye implant. This is seen to lethal effect at the end of the episode when Coulson confronts her handler, only to see him casually dispatched from afar via his own kill-switch.

The reveal of Akela/Ward’s mission being nothing more than to infiltrate an ordinary looking room containing two men with typewriters and blackboards containing mysterious and possibly alien writing is simultaneously mundane, surreal and sinister. There is clearly something vitally important there, but what?

Everything points towards the presence of an unseen Big Bad with access to unaccountably advanced technology – HYDRA, perhaps? – working towards a bigger picture, setting up a key season arc that is, to me at least, considerably more interesting than last week’s Graviton set-up.

In between the seriousness, there’s the obvious humour of Ward, taking Akela’s place, boldly stating he’ll do whatever it takes to complete the mission and then immediately being told by her handler to seduce a burly guard. It’s also fun to see Ward and Skye with their roles reversed – this time it is he who is dependent on her to accomplish the mission.

Does May hold the key to unlocking Coulson’s secret?

Coulson’s history with Akela – he trained her, and he admits to Skye he may have pushed her too hard – brings him into conflict with May, now restored to active duty. He wants to use the team to bring her in – May insists they have to take her out and is willing to go off-book to do so. Her willingness to challenge Coulson and not follow him blindly is an important dynamic, given the clear hierarchy which separates him from the rest of his team.

If anyone is going to pursue and uncover the mystery of Coulson’s return from the dead it’s likely to be May, especially after Akela’s question about what has been done to Coulson. A seed has been planted. And the team now have the tech to potentially see beyond who Coulson really is underneath the suit.

Finally, Akela ends the episode physically imprisoned but mentally free – alone and able to sleep in peace for the first time in years.

May says there is no evidence to support the existence of precognition, telepathy or ESP, excluding the likes of X-Men‘s Jean Grey from the S.H.I.E.L.D. universe. This is a nod to the fact we won’t be seeing any of the X-Men on the series any time soon, as their rights are owned by Fox rather than Marvel/Disney.

I’m getting full bars which means if I was down here and 55 guys were in scary red masks, you know what I would do? Instagram.

Skye hits on a 21st century way to crowdsource intelligence from the Stockholm subway attack.

Preview: Can Agents of S.H.I.E.L.D. work without Avengers?