Fitz and Ward are sent into the Caucasus mountains to disarm an Overkill device, a weapon in the possession of Russian separatists which is capable of using sonic vibrations to trigger other weapons from a great distance. 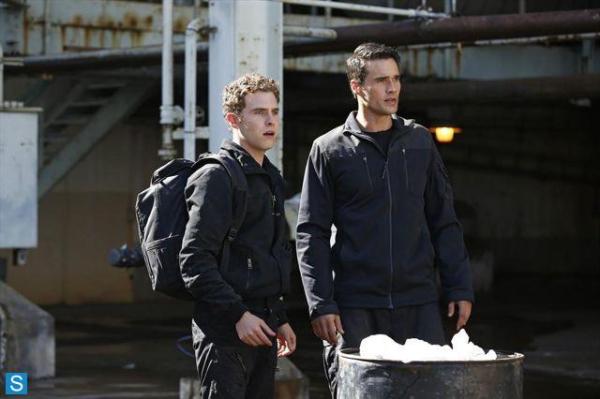 Fitz and Ward and find themselves paired together (Image: Marvel Movies Wikia)

Following on from last week’s Simmons-focused story, this is another episode which offers up a lightweight mission to allow us to concentrate instead on the least well-defined member of the team, Leo Fitz, who really comes into his own here.

Paired with Ward in order to disable the Overkill device, Fitz steps up and saves the day repeatedly with surprising resourcefulness. First he saves them from being shot by using a localised EMP pulse. Then, having successfully disconnected the device, he uses it to disarm several soldiers before knocking out the last one himself.

Having started out impatient with Fitz and believing he needed to protect him at every turn, by the end of the mission Ward finds a new respect for the young scientist.

Redacted and classified – what’s being hidden?

Fitz and Ward isn’t the only welcome new pairing in this episode. Skye and Simmons team up to retrieve classified information on their teammates’ mission. Skye uses her hacking skills to get into S.H.I.E.L.D’s systems – passing up an opportunity to read the redacted file on her parents in the process – while Simmons’ panicked attempts to blag her way past Agent Sitwell are less than convincing. She ends up shooting him with the night-night gun.

Skye does eventually learn about the contents of the redacted letter, as Coulson tells her that it mostly concerns a female S.H.I.E.L.D. agent who dropped her off at the orphanage. But who is this mysterious agent? And why did she give Skye away?

Meanwhile Coulson himself shows signs of rebelling against being a good company man. He pulls up short of his automatic response of referring to Tahiti as “a magical place”, breaks protocol with the rest of his team to extract Fitz and Ward, and by episode’s end is digging into the facts behind his own recovery – only to discover that even his level eight clearance does not grant him access.

Good, but not great

Fitz has been overdue his turn in the spotlight, and for the first time we get a glimpse of the fledgling agent behind the science geek as he more than holds his own alongside Ward during the mission. What results is a satisfying character piece. As with Simmons last week, we get the best insight into the pair’s characters when they are separated and relieved of the burden of providing exposition and rabbit-out-of-hat solutions to problems.

It’s also good to see Skye interact with someone other than Coluson or Ward, although her behaviour during this episode is particularly childish. It’s one thing not to like hierarchy and structure, but for her to require the need for information to be classified and restricted to be spelt out to her is just silly. As is leaving her unattended in the middle of a top-secret facility while Coulson,Ward and May are being briefed and Fitz and Simmons go hunting for new tech.

Having spent most of the previous six episodes confined to the Bus, it’s also good to be reminded that S.H.I.E.L.D. is a large and resourceful organisation. The ease with which Skye is able to hack into its systems, her computer skills notwithstanding, is somewhat less reassuring. It just makes S.H.I.E.L.D. look incompetent.

Anyhow, we’re now seven episodes in – a third of the season – and while Agents of S.H.I.E.L.D. continues to improve steadily (in particular with its weakest area, characterisation), it’s doing okay rather than great. While the series has to work within the confines of a TV budget, I can’t help but feel it should be mining the Marvel universe rather more than providing fans with the occasional nod and a wink. It also needs to rely less on the ongoing Coulson and Skye mysteries, with the former having now dragged on far too long.

Fitz mentions that the Hub is nothing compared to the Triskelion, which in the comic books is a huge S.H.I.E.L.D. building on Governor’s Island near Manhattan. The facility is due to appear in next year’s Captain America: The Winter Soldier.

The Overkill device is a nod to HYRDA’s comic-book weapon the Overkill Horn, which had the capability to detonate all nuclear devices on Earth.

Agents Victoria Hand and Jasper Sitwell both originate in the comics. Hand is characterised by a distinctive red streak in her hair, while Sitwell has also appeared in both the Thor and Avengers movies.

Fitz bridles at the thought that he needs babysitting by Ward.

Preview: Can Agents of S.H.I.E.L.D. work without Avengers?

1.5 Girl in the Flower Dress