This week on Orphan Black … A new clone with a twist. Cosima fulfils a promise. And Alison and Donnie find something to bond over. 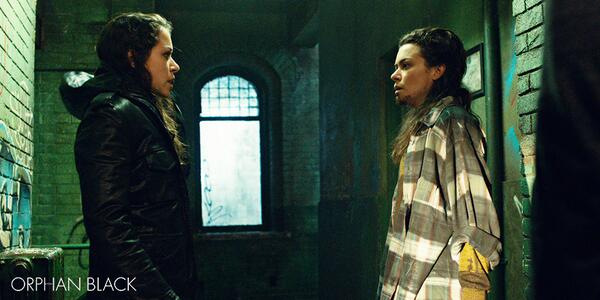 Just another variation in my sister’s skin

A previously unseen clone arrives from Cincinnati seeking Beth Childs. Felix, Art and Sarah are shocked less by Tony‘s existence than by the fact he is trans-gender. Tony is thrown when he discovers Felix’s paintings of Sarah, Cosima and Alison and eventually leaves to keep ahead of the men in suits who are pursuing him. But first he shares a brief kiss with Felix and reveals that Paul is a ‘ghost’.

This week’s big twist fell flat for me. Orphan Black has never been afraid to tackle issues of humanity and sexuality and present us with strong female characters, but the introduction of a ‘trans-clone’ doesn’t quite work. It feels like the writers are going out of their way to give tick another box in the Tatiana Maslany acting masterclass and answer one of the more rabid online fan debates about the show – namely whether the clones are exclusively female – by giving us a character which is about as subtle as a brick through a window.

Maslany, as ever, does wonders with the limited material. She plays Tony (née Antoinette Sawicki) with her usual gusto, immediately building a distinctive characterisation that transcends the clichéd rust-belt gruffness and the silly stick-on goatee. It all feels like a throwaway stunt, a fan-pleaser that takes half an episode to tell us something about Paul that hardly comes as a surprise. Although, having invested so much time in the character, I assume Tony will return at some point.

Also, why was Tony’s existence unknown to the others? Beth kept comprehensive records on all her investigations, and it seems odd that she had shared information about Katja and the other European clones with Cosima and Alison, but hadn’t passed on her knowledge of Tony’s existence or at the very least written it down somewhere.

Paul, your absence is inconvenient and your silence is irksome.

Speaking of Paul, what exactly is he up to? He’s gone AWOL, much to Rachel‘s annoyance.

Finding a cure means handing Dyad the keys to the kingdom.

Kira‘s freshly extracted tooth provides more stem cells to help treat Cosima, but Ethan Duncan‘s knowledge of the clones’ genetic sequences is needed to develop a permanent cure. He comes to Dyad, where Rachel apologises for being overly emotional at their reunion and formally addresses him as ‘Professor Duncan’.

She remains outwardly calm when her adoptive father tells her that Sarah and Helena‘s fertility was a mistake – the clones are all barren by design. Inwardly, however, she’s raging, laying waste to her office in her mind.

Cosima takes a turn for the worse (Image: BBC America)

Cosima proves to be a master at the role-playing board game Rune Wars, wiping out Scott and his friends when she joins their game. She and Delphine make up, as she fulfils her promise to get her girlfriend ‘completely baked’ and the pair admit their love for each other. She also tells Scott that the mysterious clone 324B21 who they are attempting to find a cure for is, in fact, herself. Delphine arrives with Duncan and Cosima is delighted to finally meet her ‘maker’, but she then collapses, coughing up blood as she convulses on the floor.

Having met her scientific maker, Cosima is on the point of meeting her spiritual maker too. Can Duncan develop a cure before it’s too late, and exactly what are his motivations after agreeing with Rachel that Kira remains the real prize?

Before leaving for Dyad, Duncan reads H G Wells’ The Island of Doctor Moreau to Kira, which he used to read to Rachel. The book is about a scientist who creates human-like beings by performing vivisection experiments on animals – a cautionary tale of what can happen when humans interfere with nature. Sounds familiar, doesn’t it?

Rachel returns home from rehab and is immediately angry at Donnie, who she finds in bed surrounded by alcohol. Desperate to patch up their marriage, Alison prevents him from walking out on their family. He opens up about being duped by Leekie. She confesses about Aynsley’s death, which in turn allows him to open up about killing Leekie and show her his dead body in the trunk of his car.

Alison is only marginally more annoyed that Donnie used her gun than she is about Leekie’s body being “not at all well wrapped” in plastic sheeting. Is it time for the hot glue gun again?

For the second week in succession, Alison’s storyline is played largely for laughs. But there are also some moments of real poignancy. Knowing now that her husband’s role as monitor was born out of naivety rather than malice, Alison is prepared to put the past behind them and work on saving their marriage. Now, with a death each on their scorecards, they finally have something to bond over to help them move forward. But how are they going to dispose of the body?

Overall, this was one of Orphan Black‘s weakest episodes, with the Tony storyline pushing everything else to the margins at a time when the series should be gathering momentum for its finale. Hopefully it’s no more than a minor misstep.

2.1 Nature Under Constraint and Vexed

2.3 Mingling Its Own Nature With it

2.4 Governed As It Were by Chance

2.6 To Hound Nature in Her Wanderings

2.7 Knowledge of Causes, and Secret Motion of Things

Everything you need to know about what’s happened so far