The terrifying Skovox Blitzer descends upon Coal Hill School, threatening to wipe out humanity. The Doctor goes undercover as a caretaker. And he’s about to meet Danny Pink for the first time. It’s anyone’s guess as to which of these three prospects is the scariest. 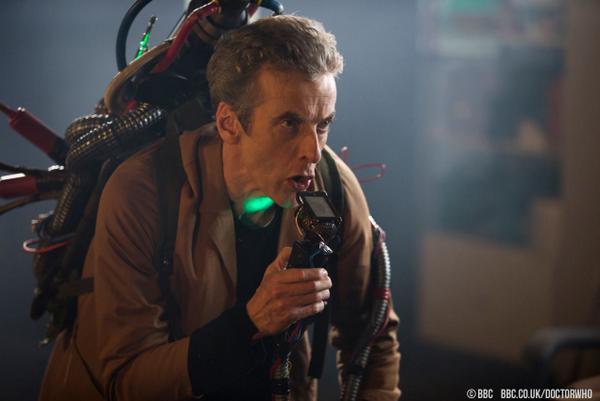 I do *not* look like an extra from Ghostbusters. It’s a thing. Got that? (Image: BBC)

Let’s start with this week’s threat, the Skovox Blitzer, which ends up as a perfunctory B-plot baddie and considerably less intriguing than the three adventures we see briefly in the pre-credits teaser.

The Doctor describes it as one of the most deadly killing machines ever but, in the best tradition of Who, it is slower than humans, can’t shoot straight and isn’t very clever. It does look great – a beautiful, intricate design reminiscent of Falling Skies‘ Skitters – but we only really get to see it in tight close-up from unusual angles (presumably so we can’t see that it’s being pushed on wheels).

It’s attracted to Coal Hill by artron emissions left by previous time travel. It trots out its mandatory catchphrase – “Problem. Solution. Destroy” – before killing a policeman. Danny‘s well-meaning interference disrupts the Doctor’s plan to hurl it billions of years into the future, but makes up for it by providing a distraction to allow the Doctor to deactivate it when it shows up at parents’ evening the following day.

In reality, the Skovox Blitzer is nothing more than a plot MacGuffin designed to bring the Doctor and Danny together, despite Clara‘s best efforts to keep the men in her life separate. 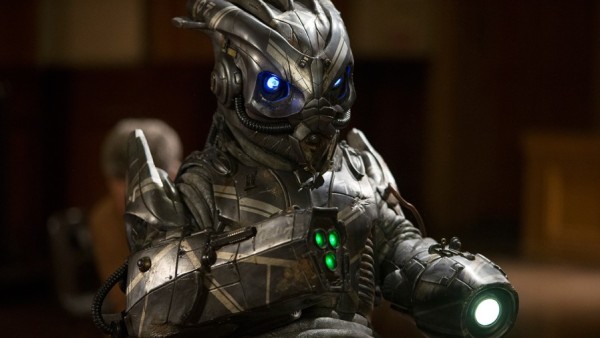 Not that deadly. Really (Image: BBC)

It’s a mistake. You’ve made a boyfriend error.

The episode’s big confrontation is really between the Doctor and Danny. It takes the Doctor a while to realise that Clara actually has a boyfriend, and then he mistakenly assumes it must be Clara’s bow-tie wearing fellow English teacher Adrian, who bears more than a passing resemblance to his former self.

The Doctor initially shows little interest in Danny’s obvious family resemblance to Listen‘s Orson Pink, but once the Blitzer has been temporarily dispatched into the future the sparks start to fly. Clara tries to sell him a transparent lie to explain away all the alien strangeness – making the same mistake of treating others as stupid that she accused the Doctor of doing at the beginning of the episode. But once Danny has recovered from the shock of the Blitzer and the TARDIS, he isn’t intimidated by the Doctor’s barbs at all and stands up to his dismissive treatment of him.

By the end of the episode, he is using the Doctor’s invisibility watch to follow Clara and ensure she is safe when the Blitzer returns earlier than expected. And when the Doctor needs a few extra seconds to complete his plan to shut it down, he obliges by fearlessly distracting it to help save the day.

There’s still an air of mystery about Danny, though. His confrontation with the Doctor suggests a previous negative experience with a superior officer, and the promise he makes Clara make about telling him if the Doctor ever pushes her too far also hints at what happened to him in the past.

The caretaker and the nethersphere

What name would you like? There’s a range: the afterlife, the promised land. I’m partial to ‘the nethersphere.’

Missy briefly makes her first appearance since the end of Into the Dalek, with her assistant likening the long white-walled room in which the dead policeman finds himself – imagery usually associated with heaven – to the nethersphere, a term that is decidedly more sinister. In a world of white, Missy wears black. Symbolism, much?

There’s also strong symbolism in the caretaker’s role adopted by the Doctor here. He doesn’t always wear a brown coat and carry a broom, but he has always been the caretaker of both Earth and humanity in general, and his companions specifically. His initial antagonism towards Danny is partly due to his military past, but also a result of his paternalistic desire for Clara to have a boyfriend who is good enough for her. Only when Danny proves himself worthy by helping to save the world does the Doctor give his and Clara’s relationship his tacit approval, like a protective father would do with his daughter’s first boyfriend.

Alongside Robot of Sherwood, this was the most overtly comedic story so far but one that worked much better for me as a three-part character piece. It’s unlikely to be viewed as a classic by fans or a story that features in many favourite episode lists, but it was good, fun entertainment and that’s no bad thing.

So as season eight reaches its midpoint, the main long-term plotlines are back to the fore. All seems to be well between the Doctor, Clara and Danny for now, but will that promise Clara made to Danny on which their relationship hangs come back to bite her further down the line?

2 Comments on Doctor Who S8 Ep6: The Caretaker