This week on The Newsroom … Charlie’s funeral sees a new future for all the characters, as we examine his role in bringing the team together via a series of flashbacks. 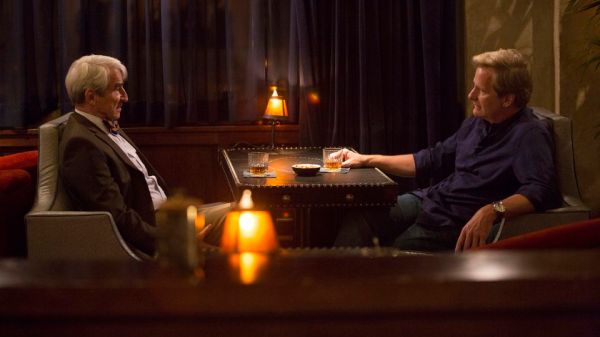 Long, long ago in a flashback far, far away … (Image: HBO)

In the present day – 27th June 2013, if anyone’s keeping track – everyone associated with ACN (with the notable exception of Reese, Elliott Hirsch and Rebecca Halliday) gathers at Charlie‘s funeral, where Mac receives the news that she is pregnant.

I’m brokering this thing because we’re all a little tired of you two missing such easy shots.

With a nudge from Sloan, Jim and Maggie try to work out where their relationship stands after he recommends her to interview for a field producer’s role in Washington. When Mac promotes him, he tries to persuade her to stay by making her his successor as senior producer, but she decides to pursue the interview anyway. The pair agree to work on a long-term relationship and Jim finally admits he loves her.

He wasn’t angry that you guys were fighting him – he was counting on it.

Don and Sloan wrestle with guilt over their perceived contributions to Charlie’s fatal heart attack. He admits this to his widow, who tells him Charlie didn’t really want him to do the Princeton rape story. She presents Don with his bowtie. He in turn gives it to Sloan.

In flashback we see Don and Sloan’s first, sparky encounter. Sloan agonises over asking him out for coffee, but when she goes to the newsroom to ask him she sees him kissing his then girlfriend Maggie and slips away unnoticed.

You were a man, Charlie. You were a great big man.

Impending fatherhood weighs heavily on Will‘s mind. After a jam session with one of Charlie’s grandsons and Jim – and after ducking out of giving the eulogy at the funeral – he addresses everyone at the wake to announce Mac’s appointment and talk to the team about how Charlie’s legacy lives on in all of them.

There was a time when journalism wasn’t a career – it was a calling.

Flashing back to three years previously, we see how Charlie pulled the strings in the background to bring the team together in the first place. He convinces Mac, who is stuck in a post-Fallujah funk and is bowling drunk during the day, to return to the studio, realising that pleasing her is the one thing that will drag Will out of his obsession with being likable but bland. He also sends her a copy of Don Quixote.

We also see Mac recruit Jim, who has just ended a long-distance relationship. And at the event at Northwestern which kicked off the entire series, she gives ‘Sorority Girl’ Jenna tips on how to be first in line for the microphone for the Q&A, allowing her to ask her ‘What makes America the greatest country in the world?’ question.

Neal returns from his exile in Venezuela, shuts down the ACN Digital website while Bree and his team are in the middle of compiling The Nine Most Overrated Movies of All Time and sets them to work rebuilding the site from scratch.

Aaron Sorkin‘s series finale brings us full circle back to the show’s very beginning, providing not so much a final chapter as a combination of prologue and postscript.

As in any Newsroom episode, there are some wonderful moments. When Will finally delivers his eulogy, it’s a fitting tribute to both Charlie and the ‘mission to civilise’ that was his brain-child, that reassures us that ACN will continue to fight the good fight with renewed energy and under new leadership. The entire sequence with a drunken Mac in the bowling alley – it’s a rare treat for Charlie to be the most sober character in a scene! – is nicely done too.

‘All-time’ and 14 years are two different units of measurement. But my question is: why is ‘overrated’ more fun than, say, ‘underrated’?

Through Neal, there’s the customary dig at new media – this week, Buzzfeed and the tendency to create snide listicles that define ‘all-time’ in the briefest of terms. (Bree’s overrated movies list goes back only as far as 1999’s The Matrix.) Only this week it’s short, razor-sharp and doesn’t labour the point.

And finally, Sorkin ties up the loose end of the origin of Don and Sloan’s romance, which first appeared as a left-field, throwaway reference in the season one finale and is finally fully realised here. Better late than never, we now know the full story of TV’s sassiest, fastest-talking romance since The West Wing‘s Josh and Donna.

Of course, it wouldn’t be The Newsroom without this final episode containing as many flaws as it does great moments. The extra 15 minutes of run-time leads to an element of self-indulgence as Sorkin incorporates the musical talents of both Jeff Daniels and John Gallagher Jr and unnecessarily re-opens the story of the Jim/Maggie relationship, which had already had a more than adequate line drawn underneath it last week.

Will’s brushing off of Mac’s concern that she only got Charlie’s job as a sop to fix Pruit’s PR problem – it doesn’t matter how she got the job, only that she did – doesn’t sit particularly well either. I don’t think there’s any doubt that Mac was the best internal candidate for the position, but I’d have hoped that Will could have come up with something stronger than that to reassure his wife.

Finally, it was sad that Neal’s return was treated as an afterthought. Throughout the show’s three seasons, the one member of the ACN newsroom who combined old school journalistic values with our 21st century world has been thrown the odd morsel but has largely been an accessory to each season’s main plotlines rather than playing a central role himself.

The whistleblower arc would not have happened without Neal but in the end he was shunted out of the picture for half the season while Will became the cause célèbre. When he returns there’s no welcoming committee, and even once he is back in the newsroom with his colleagues, his presence is barely acknowledged. (Also, given that Bree answers directly to Pruit, does he actually have the authority to come straight back in and order a rebuild of the website?)

But youngsters like Neal represent the future of ACN, if not all news journalism. Is it possible to marry old school values with new media? I don’t know the answer to that, but it is people such as Neal who will shape that future more than Will, Mac, Jim and other old school figureheads.

So, after three seasons and 25 episodes, what are we to make of The Newsroom? For all its flaws in plotting, characterisation and tone, this was a series that never lacked for ambition. It sought to portray an idealistic, almost wistful view of how modern news stories might be presented. And if hindsight is a wonderful thing, there’s still something heroic about the way the ACN team continued to make the right ethical calls at the expense of commercial gain.

The idealism of The Newsroom was in many ways an echo of Sorkin’s greatest TV achievement, The West Wing. And while it never reached the sustained heights of its predecessor – in truth, it only occasionally came close – at least it had the courage to tilt at those windmills just as Don Quixote did, rather than peddle a diet of bland, inoffensive drama.

Some of the criticism levelled at Sorkin for some of his views – at turns overly liberal and too old-fashioned – has been justified. But not all. Not by a long chalk. On balance, The Newsroom gave us more highs than lows. Give me that over a steady stream of mediocrity any day.

This episode shares its title, What Kind of Day Has It Been, with the season one finales of Sorkin’s previous TV series: Sports Night, The West Wing and Studio 60 on the Sunset Strip. (The Newsroom‘s season one finale was titled The Greater Fool, so named after the economic ‘greater fool theory’.)

2 Comments on The Newsroom S3 Ep6: What Kind of Day Has It Been