This week on Girls … Hannah discovers that Iowa is very different from New York. Her first encounter with her writers’ workshop classmates doesn’t go quite as she expected. And she receives a surprise visitor. 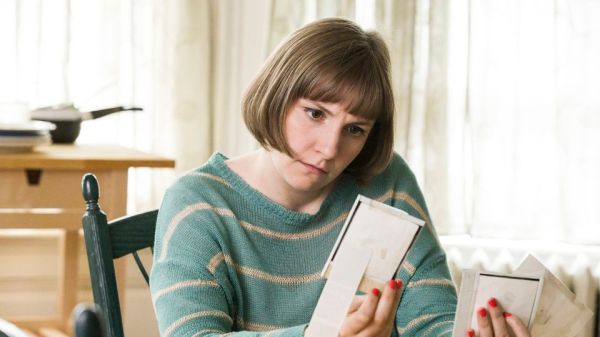 Hannah moves to Iowa and initially revels in positive experiences. She can afford to rent a big house, she’s eating more healthily, she’s told by a fellow student, Chandra, that she doesn’t need to lock her bike up and she’s looking forward to wowing her writing workshop classmates with her work.

The biggest problems she has to contend with are falling off her bike, rude service at the bookstore and a lack of phone signal. However, these are portents that things are about to take an unexpected turn for the worse.

… And downs of Hannah Horvath

A lot of people think I am 19. I get carded all the time, and no one ever thinks I’m legal, like, in the bedroom.

There are other signs that Hannah’s idyllic view of life isn’t quite in line with reality and that her chronic lack of self-awareness remains. A bat flying out of a cupboard drives her to sleep on the floor of her bathroom. A Skype call with Marnie reveals she hasn’t been in touch with Adam and it becomes clear she is in denial about missing him. Her first meeting with Chandra sees her claiming that she can still pass for a freshman undergraduate.

Worst of all, though, is the evisceration of her work in her first workshop class, for which she arrives at late and still wearing pyjama bottoms after oversleeping.

Fellow student D. August earns fulsome, sycophantic praise for his piece, being told it’s “almost offensive but not offensive” – exactly the kind of comment Hannah has always believed should be attributed to her work. But when she reads her piece, prefaced by a self-satisfied advisory about its emotional triggering aspects, the feedback she receives is overwhelmingly negative.

I had the chance to speak with Hannah yesterday and she is very much this character.

After receiving a room full of silence when her teacher invites comments as to what works in her piece, when Chandra speaks up Hannah assumes she’s rising to her defence. Instead she indirectly criticises her for writing about herself. While her peers’ rejection of her (admittedly mediocre) work is nasty, this is also a dose of reality to show Hannah that she is not as outrageously talented as she believes. Instead of going straight to the top of the class as she assumes, she’s put firmly in her place at the bottom of the hierarchy. To add insult to injury, she discovers her bike has been stolen.

When D. August extends an olive branch by inviting her to hang out with the group at a bar, she confronts fellow student Logan and jumps to the conclusion that her negative reaction must be down to her having been abused in the past. As ever, Hannah looks in the mirror and sees critique as praise.

Of course, Hannah’s treatment at the hands of her classmates is all very meta, echoing the barrage of strong emotion that follows Lena Dunham‘s every proclamation. Like Hannah, Dunham has often been accused of playing with issues from the perspective of a privileged background and for basing so much of Girls on her own experiences. Just as Hannah is not allowed to defend her work in class, Dunham finds herself in a similar situation in public forum, with everything she says liable to be turned back on her in the form of a fresh wave of criticism.

Hannah’s discomfort is as long overdue as it is painful, but the awkwardness of her over-the-top interactions with her competitive colleagues both during and outside of the workshop is sharply observed by Dunham and shows far more self-awareness than her character. It also gives us some insight as to what Hannah must have been like as an undergrad freshman before developing her group of friends, with all her smug naivety and social awakwardness being ruthlessly exposed.

Is it normal when you get to a new place to think about suicide for the first time ever?

Hannah’s response to criticism is to regress to older and more comforting times but her look-at-me cry for help receives an underwhelming response from both Shoshanna and Jessa and then her parents. In each case, they know Hannah’s histrionics well enough to ignore them, with her father throwing her off the phone so he and her mother can get back to their game of Scrabble.

Only surprise visitor Elijah embraces Hannah’s insecurities, taking her to an undergraduate rager where they dance their cares away, he gives a hand-job to a random conquest and she ends up wrestling in blue jello. As she offers some tough-love relationship advice to a young student before usurping her place in the toilet queue, Hannah only seems to be comfortable when she is confident in her superiority over everyone else.

Overall, the episode benefits from having a tight focus on Hannah’s storyline, with the other girls restricted to small cameos.

Marnie is ever more besotted with Desi, for whom she is knitting a scarf and in complete denial about the implications of being the other woman.

I hope some day I know the passion that Huck feels for Quinn.

Cousins Jessa and Shoshanna are reconnecting with each other while watching Scandal, with the latter treating one of TV’s most dysfunctional pairings as a role model.

And there’s no sign of Desi, Ray and, in particular, Adam. It’s clear that Hannah is lying even to herself about her feelings for him, but what impact will separation ultimately have on their relationship?

Ultimately, how you feel about this episode probably depends on how you feel about the combination of Hannah Horvath and Lena Dunham. While I have no problem divorcing creator from character, I’ve struggled for a long time to feel any degree of sympathy for Hannah and will do until she someone or something chips away at her self-centred heart and reveals something likeable – or at least sympathetic. Until that time, while she continues on her path of self-aggrandising self-delusion I can only admire in part an episode that was well constructed and observed but ultimately left me cold.