Porthos tracks down his father, only to become entangled in a web of deceit and human trafficking. 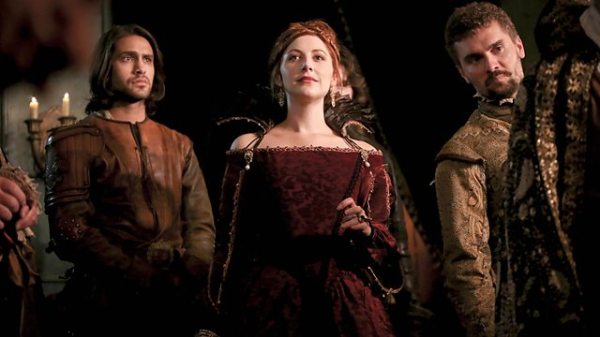 D’Artagnan is less than impressed by the ‘entertainment’ provided by Porthos’ half-sister Eleanor and her husband Levesque (Image: BBC)

The Musketeers and the panto prostitution plot

Oh dear. We have been building up to Porthos‘ quest to find his father since the opening episode, only for him and Aramis to simply pitch up rather anti-climactically at the Marquis de Belgard‘s estate even before the opening credits have rolled. And, not for the first time this season, despite drafting in a heavyweight guest star in the form of Liam Cunningham (Game of Thrones‘ Davos Seaworth) to play the role of Porthos’ father, he is promptly underused as the focus shifts instead to a plodding and predictable story about the exploitation of young girls for prostitution.

Which is a shame, because the machinations of Belgard’s lies and half-truths in trying to shift the blame for dumping Porthos and his mother in the Court of Miracles on to Treville has the makings of a decent story. Belgard, De Foix and Treville’s blood oath meant that Treville felt honour-bound to commit this dishonourable act to support his comrade when his father threatened to disinherit him. Instead, what could have been an interesting examination of codes of honour is condensed into a few short scenes, making Porthos’ sudden distrust of Treville – particularly when he reveals at the end that he knew Belgard had been lying to him – feel rushed and contrived.

Belgard is certainly a more interesting and complex character than his cruel daughter Eleanor and her sadistic husband Antoine Levesque, a pair of sneering pantomime villains whose only apparent motive is greed in a storyline that is of minor interest to social historians but serves little function other than to create the episode’s sense of jeopardy and give Athos and D’Artagnan something to do other than look moody as they work through their respective women problems with Milady and the grieving Constance, who is comically courted by Doctor Lemay.

Ultimately the good guys defeat the bad guys, Belgard’s plan to turn Porthos against Treville fails and D’Artagnan returns to the garrison to find that Constance has decided to throw formality to the winds, cast off her black mourning robes and declare her love for him. Again.

Far more interesting this week was the B-plot which saw Rochefort learning the truth about Aramis and his beloved Anne, accelerating his descent into madness and leading to the concluding scene in the queen’s chambers in which he unravels before our eyes, demanding that she tell him she loves him as much as he does her and forcing himself upon her when she refuses. Only Constance’s return prevents him from going further, Anne stabs Rochefort in the eye and he places her under house arrest and promises to tell an already paranoid King Louis about her and Aramis. Uh oh.

And so begins the endgame. With Aramis seemingly heading for a charge of treason and Constance likely to be endangered by her support for Anne, could Milady yet prove to be the Musketeers’ most valuable ally?

Having seeded Porthos’ search for his father throughout this season, what we ended up with was a lot of build-up for an episode which tried to carry three major plotlines – the Porthos/Belgard/Treville mystery, Eleanor and Levesque’s distasteful trade and Rochefort – and ended up with the first two detracting from each other, with only events back at the palace feeling properly done. The end result? A pedestrian story which moved the ongoing season arc on nicely but failed with its central story. Poor – and a real let-down after last week’s barnstormer.

2.6 Through A Glass Darkly

2.7 A Marriage of Inconvenience

6 Comments on The Musketeers S2 Ep8: The Prodigal Father